Campaigning For Inclusive Advertising For The LGBT Community

The Pink Pound Conference challenged leading brands and the advertising industry to engage in open, honest debate and to more inclusive ways engaging with LGBT consumers.

Through education, challenge and discussion, it aimed to bring to an end the outdated portrayal and treatment of gay consumers in mainstream advertising.

The event followed six months of intensive research, collaboration and discussion with world authorities on the LGBT community. It featured brands Like BT, Diversity Champions who launched Kaleidoscope a support network to provide a forum for its gay, lesbian and bisexual employees and offering mutual career support for staff members. The initiative championed inclusion into the workforce and raised awareness of the positive contribution that gay, lesbian and bisexual staff made to the company and BT’s bottom line. It also educated BT’s marketing department, who were able to draw from the groups’ insights to improve their marketing and advertising approach. By addressing and improving “how best” to include and engage BT’s LGBT customers base more appropriately, this positioned BT at the forefront in the minds of consumers as proactive diversity champions.

Equality campaigners and thought leaders including Stonewall, Europride, Diva magazine and the Advertising Standards Authority highlighted the opportunities for a better aproach and greater inclusion in light of the 2006 Equality Act, outlawing discrimination on the grounds of sexual orientation in the provision of goods, facilities and services. For more on the history and background of the Pink Pound in the UK

The Pink Pound Conference was a groundbreaking initiative and significant milestone in the UK as the first-ever event dedicated entirely to the LGBT community consumer.

Designed as a definitive guide to understanding and attracting the LGBT and gay consumer, it recognised that the Pink Economy was at the time a subject that was passionately debated, widely reported and yet least understood in 2006.

The history of pink consumerism

Dr Justin Bengry a Lecturer in Queer History and convenor of the world’s first MA in Queer History at Goldsmiths, the University of London in his project ‘The Pink Pound: Capitalism and Homosexuality in Britain’ which seeks to redefine the Pink Pound more broadly, identifies segmented marketing to potential pink consumers more widely dating back from as early as the 19th century. Want to know more about The pink pound’s hidden history 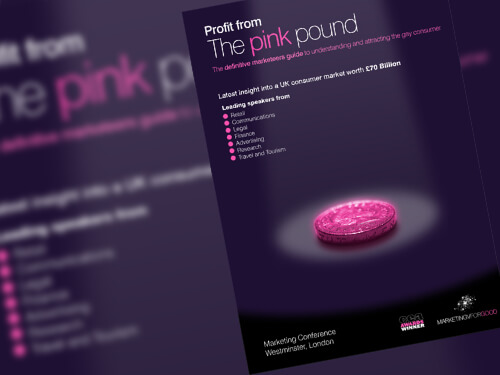